Russian Internet? What's that? Does it exist? Having been asked so many times "Is there Internet in Russia?", I'd like to put together this basic info on RuNet = Internet in Russian and also talk a bit about website promotion to get Russian buyers.

So, if you are willing to promote your real estate, goods or services in Russia and other Russian-speaking countries through the Internet, you'll be in this great company.

What can you do to promote your Russian website to the top in Russian search engines, to win as many visitors (and turn them into clients eventually of course) as possible?

Feel free to go from Russian Internet to CONTACT form and ask any questions you might have about your possible presence in this rapidly growing media - Russian Internet.

P.S. For those of you who are interested in your Russian internet presence, here is the e-book to help: *How to be the First on Foreign Google* (click on the cover below to go to Amazon). 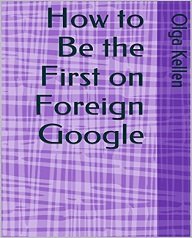